In this blog, we will look at the current topic for increasing issue, which, unfortunately, carriers are increasingly experiencing in their everyday work, namely the theft of goods (partial and complete, together with the vehicle). Single major case could have a very negative impact on a transport company, so in this article we will look at the most
common case studies and some preventative measures that carriers could take to avoid or minimize the occurrence of such cases.

Over the past few years, the transport industry has faced growing challenges and problems in various aspects of business, one of which is the theft of transported cargo or complete theft of the vehicle along with the commodity. According to the latest statistics from different organizations (in example TAPA EMEA), registered cases of theft and the total value of the stolen goods amounts to billions of euros for only one year.

It is almost impossible to determine even the approximate value of the goods being stolen and the affected firms along the chain, as reality shows that a very high percentage of cases are not reported due to the unlikely chance of locating the goods
and perpetrators of the theft. Another part is registered by the police authorities in the respective countries at the venue, but the problem is that the police do not provide official data on these cases and on the other there is no common register in Europe or the European Union where any suffered party could record the cases they had. Most cases of theft are currently reported in Western Europe, in the countries: Great Britain, France, Benelux and Germany.

ВIn fact, from the overall palette of possible cases and theft scenarios, which will be described by examples, the most disadvantaged are international carriers operating in Europe or cabotage operations in a country on the continent. A single partial theft of goods, such as the entire commodity or the cargo together with the entire vehicle, has, in the most important aspect, financial implications for the carrier, the inability to perform its normal business services, administrative obstacles with state and police authorities, not least of importance, the settlement of the resulting claims / damages for missing  goods as a result of the theft, which should be handled under the terms of the CMR Convention. The latter includes notification of the damage / theft to the Carrier’s liability Insurer (CMR Insurer) which, in turn, according to the covered risks and policy exemptions, could intervene for a more adequate resolution of the case, but could also
find grounds to deny liability because of an uncovered risk: for example, the chosen parking place for driver’s night break or other non-compliant conditionality.

Therefore, in the event of such occurrences, the carrier literally remains alone, which itself is not an easy task, since each individual case is specific and has substantial conventions and possible options for development and solution. That is why transport companies should have a trusted and experienced partner to turn to in such situations as to assist them in
optimizing the damage and in their interest. In this case, our partners Claims Trans could help. Another important aspect is the prevention and ways in which carriers can prevent or minimize the possibility of such occurrences over all, which will be a subject below.

Here are examples of the most common cases of theft of practice and the latest trends.

One of the most frequent cases is partial theft of the goods in front of a loading or unloading address, during waiting time at loading / unloading point, a ferry or during the driver’s night break. This is the largest percentage of cases, as it is most common case when the carrier waits in a queue or for its unloading time, and in many cases due to a delay, the working time of the receiving warehouse expires or that of the driver. In such cases, it is already too late for the driver to search for parking location in the area, and because of the elapsed working time, drivers most often decide to stay parked near by
the unloading address till the next morning. This is what the criminals wait, who are concentrated in the logistics areas and at the same time are aware of the types of commodity that is being loaded / unloaded at the area. Theft occurs during the night, most often after driver is raid with a gas while sleeping in the cabin, and unable to react. Only after waking up the next day, most often with a headache resulting from the gas, the driver finds out what happened;

Theft during the transit

Another common cases of theft are during the transit while the vehicle was parked at a gas station or parking lot during driver’s 45-minute break or overnight break. Again, the thefts are carried out by organized bands that are distributed across territorial areas and are active in parking and rest areas for vehicles. In these cases, criminals usually act on the “sample-error” method, i.e. cut the tarpaulin of the load compartment by checking the goods being carried, and then the thieves are acting when they find an attractive commodity. They make slits in the tarpaulin over a meter to check for each
item of the groupage goods, for example. It is interesting to note that there is a dependence and certain ways of cutting the tarpaulin from the thieves when checking the goods in the load compartment. It turns out that each band has its own “signature” when cutting the tarpaulin, i.e. the cuts are made like the letter’s “C”, “L”, “O”, etc. When the theft has been established, the carrier has nothing else to do but to call the police and obtain a police report or record, which is obligatory for carrier’s CMR insurer subsequently. A problem with some cases of theft during the 45-minute pause of the driver is that he does not even know he was a victim of theft. Criminals act while he is next to a nearby gas station, and after returning, he goes straight away without realizing that the load is already “lighter” than a few minutes ago and actually finds out the theft only afterwards, yet it is important to alert the police and received a protocol, but could only suggest where the theft might have happened;

Theft of the whole vehicle together with the commodity

Theft of the whole vehicle together with the commodity. These cases are most often the result of an organized crime scheme where criminals purposefully plan their purpose and venue. Typically, the objective is an attractive and expensive commodity, also a fast-moving commodity. The options which the criminals use, are either by force or weapon in which the driver is at risk, or waiting for a convenient moment when the vehicle is left unattended even for an extremely short time. In the last few years, even in Bulgaria, there are a significant number of cases of theft, one of which is when the
driver lefts the vehicle for just a minute to take the documents of the goods and then finds out that truck with the goods have disappeared. Other well-known cases from the last 1-2 years are the thefts from a parking lots – paid with a ticket or ones owned property by the transport company. No matter that there was lighting, fence, video surveillance, even security, the thieves are unscrupulous. In some cases, the vehicles are being subsequently discovered, naturally without a commodity, and the cargo itself is “vaporized”, perhaps most often through “promotion” at some online store or on the
next “Black Friday”. 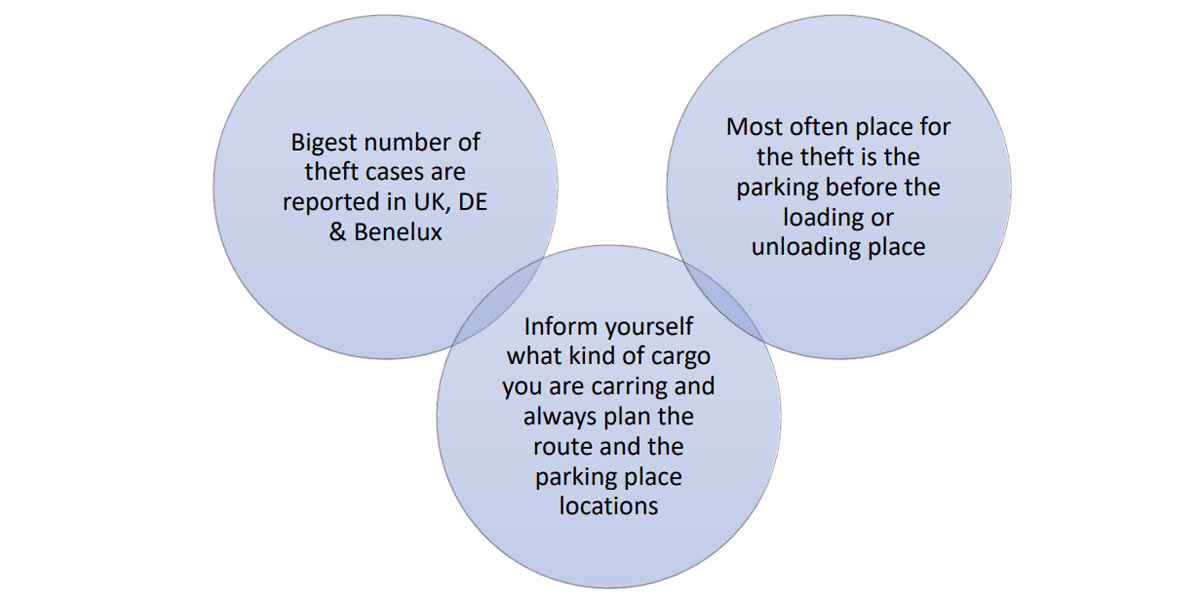 From all of this, the problems are again for the transport company, who in most cases needs to deal with such cases alone and, above all, with the resulting claim for the missing goods by his client / freight forwarding company. An important clarification for carriers is the fact that even when the goods were insured with a cargo insurance, this does not relieve the carrier of liability and he as the final carrier is still responsible for the claim as the last one and actual carrier. In majority of the cases, the cargo insurer triggers a recourse action against the forwarding agent or the carrier, after paying compensation to the owner of the goods. Depending on the chain of assignment of the transport contract, the recourse could be firstly through the freight forwarder, but unfortunately the case still reaches the carrier after all.

After identifying the most common cases of theft, it is important to list the mainrecommendations for the prevention of many of the cases, which, unfortunately, could not always cripple criminals by 100%:

The above described in the article is in fact one of the main “sick topics” of the transport industry and, of course, it is not possible for an article to summarize all possible options as well as to solve the problems of lack of organization by the European institutions and construction to secure parking places for vehicles, as well as better control, security or
case detection and trapping of criminals, but what each carrier could and should do is take care of their business and employees, by undertaking everything possible to prevent such cases, so we think that this particular article will be useful for all transport companies.

This website uses cookies to improve your experience while you navigate through the website. Out of these, the cookies that are categorized as necessary are stored on your browser as they are essential for the working of basic functionalities of the website. We also use third-party cookies that help us analyze and understand how you use this website. These cookies will be stored in your browser only with your consent. You also have the option to opt-out of these cookies. But opting out of some of these cookies may affect your browsing experience.
Necessary Always Enabled

Any cookies that may not be particularly necessary for the website to function and is used specifically to collect user personal data via analytics, ads, other embedded contents are termed as non-necessary cookies. It is mandatory to procure user consent prior to running these cookies on your website.

SAVE & ACCEPT
Go to Top