A recent study by https://inconvenienttruck.eu/ states that there are over 13 million transport vehicles in Europe, of which about 80% are heavy-duty trucks or vehicles with a total permissible laden weight > 15t. 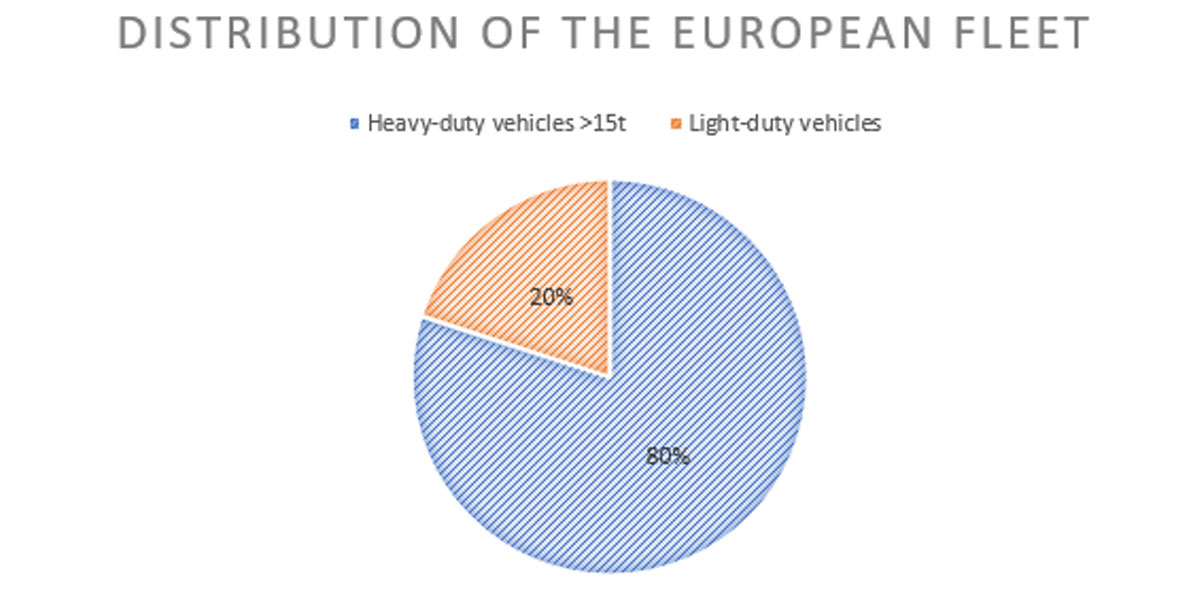 In this article we will look at heavy goods vehicles, as they represent, in a similar proportion, the largest sample of the Bulgarian carriers’ fleet. One of the main indicators of “success” among carriers is the mileage traveled within one calendar month or year

In the vast majority of cases (whether they are executing import/export routes from home country or cabotage transport within Europe), the minimum mileage that a single transport unit is intended to travel in order to achieve good profitability is an approximate 10000-12000 km / month.

Of course, there are business models among carriers that travel less kilometers, but with better profitability per km. due to the value of the cargo, as well as carriers that have optimized the weekend and have an average of over 12,000 km on average.

For ease of calculation, we will use a monthly mileage of 10000 km. per transport unit. The unavoidable cost of the mileage is the cost of Energy (in the most common case –  diesel fuel), the toll payments, driver’s costs, and depreciation costs (including Tires, oils, lubricants , and others.). In a brief study amongst the major manufacturers – Mercedes, Scania, Volvo, MAN, DAF, (all EURO 6), the manufacturer’s stated consumption in real tests with a load of at least 18 tons. varies between 25-29 l / 100 km. Given the different fuel prices in each country, we will take an average value to calculate the total cost.

The average price in Europe according to https://autotraveler.ru/ as of January 13, 2019. is 1.19 EUR with VAT or indicative 1.00 EUR without VAT. That is, to get around 10,000 km, we will need between 2500-2900 liters per vehicle or 2500-2900 EUR excluding VAT. In other words, an amount in the range of 0.25-0.29 EUR / km will cost you to pay the fuel for the distance traveled. In the section of road tolls, the situation is similar, based on the analysis of various freight transport companies, Truckpoint sets an average toll rate per km. (as of January 2019) in the order of 0.15 EUR – 0.20 EUR, which of course depends on the countries where goods are most often transported, the emission class of the vehicle, the number of axles, in some cases even the weight of the load. For the purpose of the exercise, we will take a conservative value of 0.15 EUR / km excluding VAT, resulting in an additional cost of 1500 EUR to travel 10000 km / month on paid road sections.

The cost of an international transport driver has grown significantly over the past few years, with lower graphs perhaps better targeting newer drivers in the industry than average drivers’ retirement expectations.

In a large aspect, wage levels have begun to overwhelm Western ones, and this is on the one hand driven by the lack of “new additions” to this category of labor, as well as by the strong growth of Bulgarian transport companies in recent times. At levels of the order of 2000 EUR / month, for the purpose of our calculation, at 10000 km / month, this makes an approximate 0.20 EUR / km. 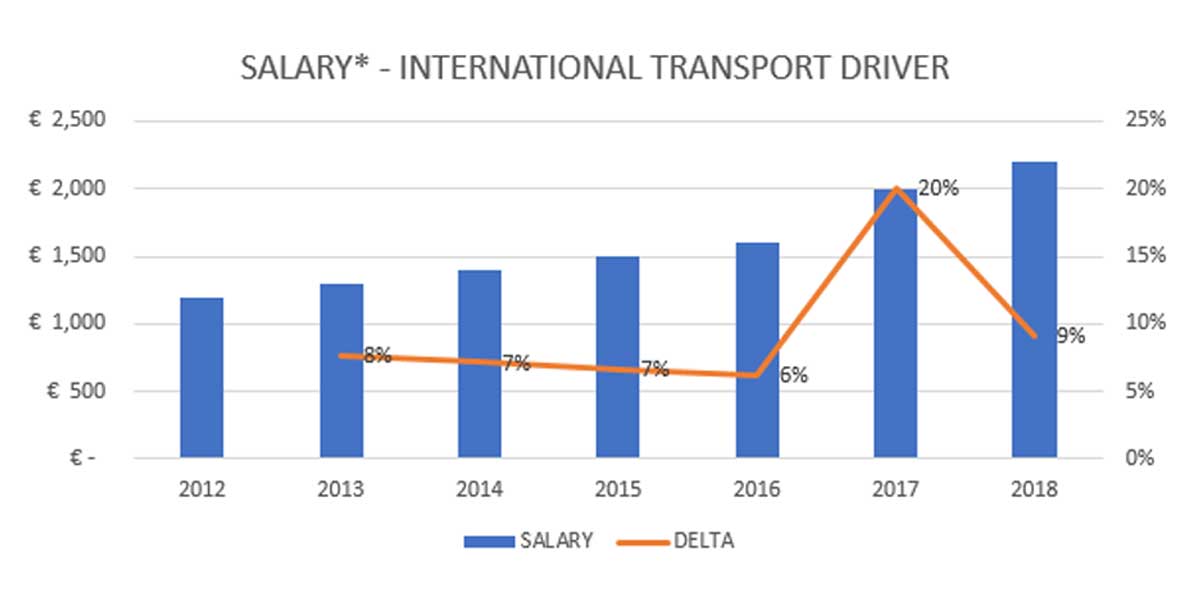 The expenses for other operating costs (including tires, oils, repairs) are also not negligible, as on the basis of several interviews with carriers, the amount varies between 0.05 EUR / km.

Of course, this depends on a lot of things, initially made investments in better quality products and other non-carrier-dependent circumstances. In other words, this cost item will cost you roughly € 500 to travel 10000 km in one month.

To summarize what we have written here, we will add an approximate monthly lease payment (depending on the initial installment) of a EURO 6 truck to the standard terms of each of the leading manufacturers. Let us use a table to sum up the above mentioned operational costs by sticking to the more conservative options, namely

In addition, carriers also have many other costs, such as vehicle investment costs, insurances, liability, casco and cargo insurance, the last two are not mandatory but highly recommended to avoid further complications with the business.

The cost of the already outlined costs is certainly influenced by many economic factors and the more important information we need to get out is the following: 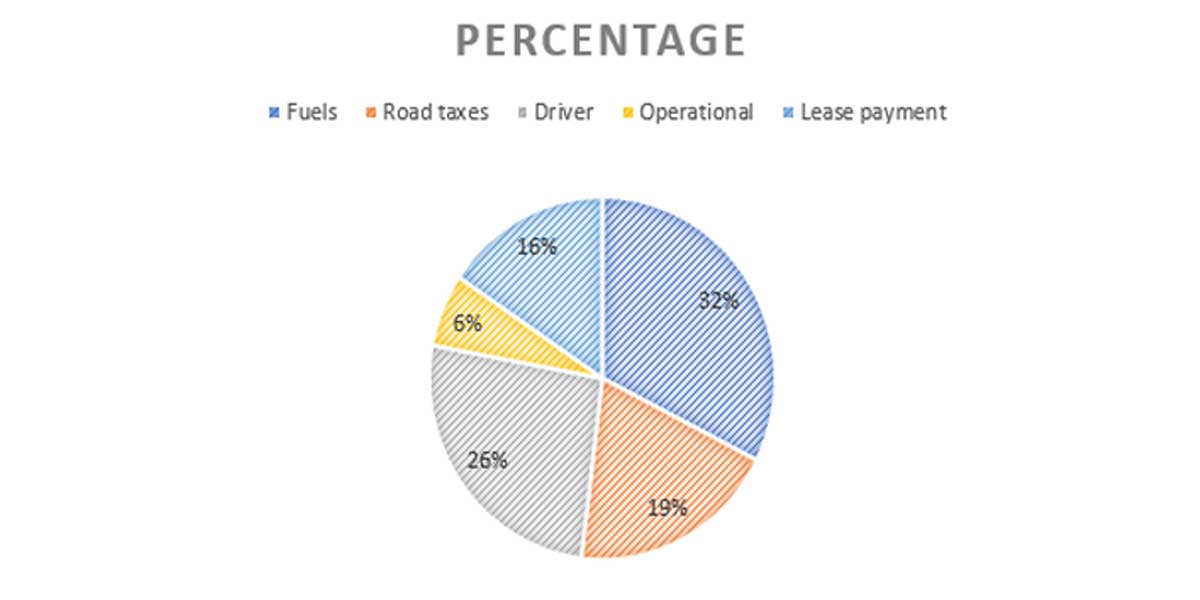 Fuel and tolls account for 50% of the total operating costs, and given that driver spending cannot be optimized, especially if we want to set high quality staff, Truckpoint’s team advises to focus on reducing the first two components , namely the cost of Energy and the value of the paid road sections.

Of course, the proposed calculations are based on averages, and the different carriers in various countries may have deviations from the values ​​and percentages given. It is a fact that fuels and tolls are a major resource that can be optimized by applying the right measures.

This website uses cookies to improve your experience while you navigate through the website. Out of these, the cookies that are categorized as necessary are stored on your browser as they are essential for the working of basic functionalities of the website. We also use third-party cookies that help us analyze and understand how you use this website. These cookies will be stored in your browser only with your consent. You also have the option to opt-out of these cookies. But opting out of some of these cookies may affect your browsing experience.
Necessary Always Enabled

Any cookies that may not be particularly necessary for the website to function and is used specifically to collect user personal data via analytics, ads, other embedded contents are termed as non-necessary cookies. It is mandatory to procure user consent prior to running these cookies on your website.

SAVE & ACCEPT
Go to Top